Working within International Trade is a pure delight, you can be talking about export documents for Brazil in the morning, have a discussion on marketing in Taiwan over lunch and then Brexit and the implications of such in an afternoon.  Such is a quiet day in the office.

However, sometimes things get a little more hectic, more challenging.  No less interesting or rewarding for that, just a test of stamina, something International traders need to have in abundance when travelling, meeting new people and looking for the opportunities.  Eating chocolate sadly will just not work – regular meals and sleep are essential as are sensible shoes.  This last one got me recently when I had my shoes with a 2-inch block heel on all day and then was expected to walk a mile uphill to another meeting!

During the month of September, I was lucky enough to travel to three separate countries and three UK cities.  12,000 miles in one month is not a record I particularly want to beat (at least not for work) and I needed every ounce of stamina.  All the trips were fruitful, and all for different reasons. 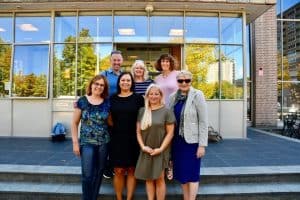 Trip 1:  The first was to finish an Erasmus Plus project on behalf of Devon Chamber and with representatives from Finland, Austria and the Netherlands.  This was on matching the aspirations and basic skills of employers to school curricula.  Entitled the World of Work it was a great project in bringing education and employers together. It was educational for me too, as an Erasmus student myself who had studied Law at the University of Barcelona in the extra year it was fascinating to be amongst those that set the agenda, the curricula, the outputs and the outcomes. As a group we were hosted for this final meeting in Hertogenbosch, a delightful city south of Amsterdam.  For those that visit I can recommend the Boscheball

Trip 2 of my travel odyssey beckoned and I was in another plane, this time going to Russia.  I had been to Novorossiysk, on the Black Sea some 20 years earlier when I was asked to represent the economic interests of Plymouth, the two cities being twinned since the end of WW2.  Despite the challenges of getting the right sort of Visa and getting through security again in Vienna (Austria Airways fly to Novorossiysk from Heathrow via Vienna for about £400 return) which is a nightmare, we arrived to a warm welcome in both the weather and the hospitality.  Without exception we were welcomed and hosted beautifully during our 5 days there.  There is a real feeling of similarity with the South West given both our geographical situations – miles away from the political base of our respective countries.  Trade really is a way of peace, people dealing with people, forming relationships and providing equal prosperity. 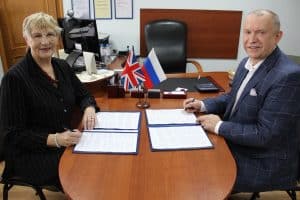 We signed an MOU with the Chamber of Commerce, met with a good number of companies who want to open doors to trade with our traders, met with Rotary, visited a Champanski factory and to top it all were taken to a football match between Chernomoretz (Russian for Black Sea) and Moscow Spartak!  There were invitations from the City administration to attend, there were television interviews, meetings with journalists and, visits to language schools and Universities.  Full on, non- stop, I was glad we were staying in the Hilton (just £60 a night for two for B & B if you are interested).  So, what have we come back with – lots of enquiries for contacts, expressions of interest in visiting the SW (perhaps for the upcoming Mayflower 400 events), a request to find a placement for a young Russian Graphic Designer and to attend another event in London in November to formalise the MOU in the presence of Prince Michael of Kent.  I note that the journalist who travelled with us has created some excellent copy to illustrate that Russia is open for business.

Trip 3: The sun was shining, the doors were open, I was actually about to go into the offices of the WTO, an impressive building on the banks of Lake Geneva, I could hardly believe it.  I was ready, excited, humble, proud – it was a seminal moment in my chosen profession in international trade.

When I started my career in International Trade some years ago, the GATT Uruguay Round was underway, talks that eventually took over 7 years to complete with participation from 123 countries.   It was during this round that the WTO was created.  The subsequent Doha round started in 2001 and incredibly has still not yet concluded.  I knew that there was a GATT round initiated in Torquay in 1950 and that the main work of the rounds and the WTO was and is to promote international trade by reducing or eliminating trade barriers such as tariffs or quotas.  Impressive stuff, and one I was aware of especially as my small consultancy based in the SW of England helps companies with those same tariffs and quotas, interpreting classifications, tariff rates and country groupings for preference of origin rules. We are to my mind, at the cutting edge so to speak while those at the WTO provide the grass roots, the reasoning, negotiation and deliberation coming together to make a sense in most cases – heady stuff!

As you would expect security was tight, but on gaining a very fancy Lanyard (now kept as a special memento) we gained access to the inner sanctum. People everywhere, all races, languages and dress blended together into a melee of noise and smiles.  People on phones, on laptops, in discussion, drinking coffee, waiting for lifts – a place of industry, everyone smart, engaged and there to do business.  Our programme was defined, we knew which sessions we wanted to attend, all marked down, consecutive, concurrent, early, late – it was difficult to know which sessions would prove the most beneficial, which ones could be missed.  In all honesty I would have liked to have gone to them all, but with 6 or 7 at the same time repeated throughout the course of the Public Forum it would have been impossible. 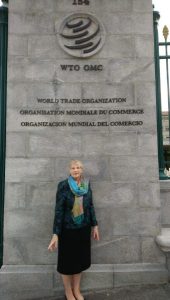 There was talk of multilaterals, talk about plurilaterals and of course bilaterals – all words I knew but freely used by those present until my head started to spin a little.  There seems to be a style of talk amongst policy makers that I had not appreciated nor had ever come into contact with, certainly in my sphere of influence and operation.  That so many people had a career within policy was a real eye opener.  I certainly had not considered it when I gained my degree, and certainly no one told me that such an option existed.  It was an interesting realisation.

The three days were magical, exhilarating, exhausting and stimulating.  I attended sessions relating to the creation of support services for MSME’s (Micro Small and Medium Enterprises); on Blue Economy/Green Trade; How to account for a more Servicified economy; Towards an inclusive resilient trading system aligning gender, rights and trade amongst others.  I was invited to the WTO cocktail party, a reception at the British Ambassador’s House, to bilateral meetings with Trade Ministers from Uruguay, Canada and Australia.  Sitting in the main atrium you could meet and talk at will with people from over 100 companies.  At breakfast in my hotel I found myself being introduced to the Ambassador of Uganda and being blamed for Brexit by an irate European – at the same time!

Being amongst people who represent the initial process behind Trade Regulatory regimes gave me insight and a new appreciation of the depth of detail; the relative slowness of process and, the delicacy of policy making.  Being part of the British contingent gave me an inordinate sense of pride, especially as the reaction to our future status in the world post Brexit was overall one of positivity (apart from my breakfast encounter).  As a small business owner, I was without exception, welcomed and invited for comment in the bilateral meetings and encouraged to do so throughout. I was made to feel that my experience counted, that I had a voice that they wanted to hear which would add value to their future deliberations.

By now I was flagging somewhat, overwhelmed by the breadth of experiences, the rapidly growing number of business cards and still trying to run a business.  And the coming week was spent doing just that – we had two courses to deliver in both Bristol and Newcastle (yes, another plane!).  In the enthusiasm of planning we had thought that we might get about 50 for each event we were holding on AEO.

Thankfully bookings were slow so we average out at about 10 for each one, was I glad that it worked out that way.  Excellent course, excellent delegates all trying to work out if AEO is an advantage or a distraction.  Great cities, and great to be working with one of the UK’s top legal firms – Womble Bond Dickinson.  Sadly, the last plane journey of the month of travel proved to be somewhat problematic as we ran into storm Callum – at 50, 000 feet!  It certainly had a dramatic effect, worse than the turbulence in crossing from Hong Kong over to Russia via the Himalayas. 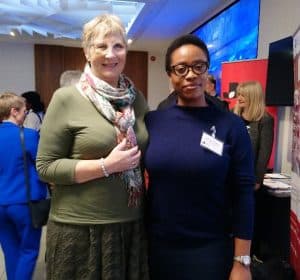 And so, to the last trip, the one I couldn’t miss – this time to London for the British Chambers of Commerce annual Global Summit.  Fantastic, and a real treat to be with people who matter within the trade.  I met my friends at the Russian British Chamber, I talked to one gentleman who has started up a company called SupplyFinder and heard from the chief designer at LandRover.  I met a lovely lady called Blossom from the Nigerian-British Chamber of Nigeria (handy as I had met the Chief Trade Negotiator for Nigeria in Geneva) and had a quick chat with Ronan Quigley from BCC about coming to Plymouth for Mayflower celebrations (watch this space).

What a month! I hardly had time to draw my breath, I saw and met really interesting, kind and some not so kind people.  They spoke different languages (sometimes even those speaking English), were dynamic and interested in doing business.  And that is what it is all about, opening doors to countries, to trade is done through people.  People like you and I, people who work hard, who don’t want to rule the world (can you imagine anyone who would want to given the state we find ourselves in) we just want to make a difference, earn enough so we can go home at the end of the day or the end of the month and be.   I intend to ‘be’ for at least a few weeks before my next journeys – how much is it to get to Nigeria?

Getting The Basics Right – Part 2 – #Communications - the second in a series of four #blogs looking at some #fundamental areas of business. https://internationaltradematters.com/discussion/getting-the-basics-right-part-2-communications/
#Freedownload #whitepaper #businessskills #learning #grow