A brief history of the UK-Russian relationship and modern trade opportunities between these great states.

On 28th February 1557, Londoners were delighted by the image of a Russian Ambassador entering the city.

He was greeted ‘with great admiration and plausibilities of the people running plentifully on all sides’ 1R. Hakluyt, The Principal Navigations, Voiages, Traffiques, and Discoveries of the English Nation (Glasgow, 1903-5), ii. 355.

Since the Elizabethan period and the start of the bi-lateral relationship, Russia and Britain have experienced a roller-coaster relationship – been allies against Napoleon, enemies in the Crimean War of 1850, rivals for control of Asia, allies in both World Wars & enemies once more during the Cold War.

In 2014 during the Ukrainian crisis the relationship grew hostile & the U.S., the EU and Canada introduced specifically targeted sanctions upon Russia after interpreting the situation in Crimea & Eastern Ukraine. 2 “COUNCIL DECISION 2014/145/CFSP of 17 March 2014 concerning restrictive measures in respect of actions undermining or threatening the territorial integrity, sovereignty and independence of Ukraine”. Official Journal of the European Union. 17 March 2014. This ‘interpretation’ is still disputed by Russia.  The Russian economy contracted at the fastest speed in six years in 2015, as plummeting oil prices and sanctions over the Ukrainian crisis impacted.

2016 & 2017 we saw positivity return with Russia’s Director of the RBCC Alan Thompson stating that ‘we see [Brexit] as something that opens up new prospects and new opportunities”.  We even saw Mr Johnson making the first UK foreign secretary visit to Russia in five years, opening the channel of communication between the two nations. 3“Johnson urges better Russia relations”. BBC News. 22 December 2017.

More recently relations have plummeted once more, and we have the severe frictions regarding the poisoning of a Russian double agent and his daughter in Salisbury, and the alleged chemical attack in Syria. 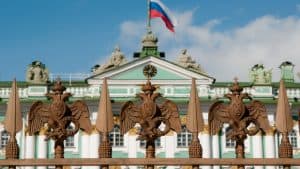 In these uncertain times in our relationship with Russia we need still to be mindful of our future and the post Brexit reality which faces the UK economy.  According to the Institute of Export, Russia is the UK’s fastest-growing export market & since 2001, growth between the UK & Russia has been on average of 21% year on year. 4Institute of Export http://www.russia.doingbusinessguide.co.uk  Russia also has 140 million consumers searching for services and goods.  These services and goods can only increase the need for international trade & relationships.

It may be considered that another area of cooperation could be financial services, as a key part of UK exports.  In 2016 the UK netted a total trade surplus from financial and related services of $93.6bn (£69bn). 5http://www.cityam.com/277578/uk-still-worlds-top-financial-services-exporter-generating  The UK’s place in the global financial system is considered to be ‘unparalleled’ according to The City UK’s Anjalika Bardalai who went on to say “we cannot take this position for granted. Brexit is likely to create some economic friction with our largest trading partner, the EU, and with an increasing number of regional and specialist centres arising in Asia and elsewhere it is vital that the UK seek new trading and investment opportunities.”

Russia, in comparison with other emerging economies, has a low penetration of the banking sector and a concentration of the market share with Russia-owned banks.  Another area of opportunity for collaboration?

During a House of Commons debate, discussing Anglo-Russian Relations, Daniel Kawczynski, who served on the Foreign Affairs and International Development Select Committees stated that he has ‘deep and personal reasons to dislike and distrust Russia and its actions. I am of Polish heritage. Poland suffered terribly at the hands of the former Soviet Union’ 6Hansard, Anglo-Russian Relations 04 May 2016 Volume 609 Mr Kawczynski felt he needed to make a personal statement to the House before he spoke regarding his concerns regarding the ‘growing anti-Russian sentiment’ after receiving strong criticism for raising the subject.  He went on to say he would like the Government to ‘show an interest in the ability to engage with the Russians, to support greater cultural and scientific exchange with them, and to show us that they are doing everything possible to lower tension’.

These are challenging times for anyone wanting to do business in Russia.  But a stronger relationship between the British and Russian is still possible with a balanced approach.  It is unlikely that we will feel as we did in Elizabethan times however if Mr Kawczynski is able to support a greater exchange to lower tensions, maybe UK businesses will be able to, so they will enjoy the upturn when it comes.

At International Trade Matters Ltd, our experts can assist you in all aspects of international trade services across sectors, geographies and disciplines. Get in touch! We’d love to hear from you.